Great To Be Here® is a division of Festa Stuff Incorporated, and is owned and operated by Christopher Festa.  We currently work out of the ThriveDTSP Center in Downtown St. Petersburg, Florida, at 136 N. 4th Street - it's a great place!

Great To Be Here® T-Shirts was founded in Chicago in 2003 by Designer Christopher Festa under the name “Festa Stuff”.  You may know Chris as "The TBOX Guy" from his other business, TBOX Bar Crawls in Chicago.  He has actually been making t-shirts since quitting corporate America for good in May, 2003.  After taking a big stab at the wholesale market, going to over 50 major trade shows, and having our line carried in over 1,200 retailers in the USA and Worldwide from 2003-2011, we just weren't quite getting where we wanted, so decided to focus on the Events business.  But Mr. Festa's passion for t-shirts never died, and thanks to advances in the Print-on-Demand market, we can now offer our updated classic designs and new ideas through online sales!

Starting with his first t-shirt idea, “In Dusty We Trusty”, celebrating the Chicago Cubs, Festa T-Shirts took off at street festivals and shops around Chicagoland. Festa began developing shirts celebrating Chicago, then the Midwest, then the entire USA and World, reflecting his love and curiosity for the unique aspects of different people and places. 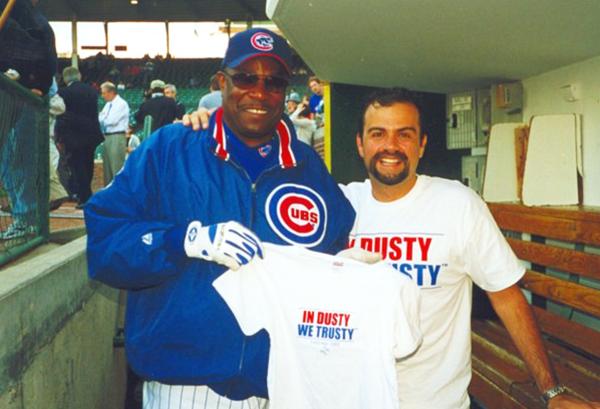 Festa moved into an office in 2004, and with a small design and sales staff, toured national trade shows and were carried in over 1,200 retail boutiques, department stores, and specialty shops by 2009, when the name was changed to Great To Be Here® T-Shirts. 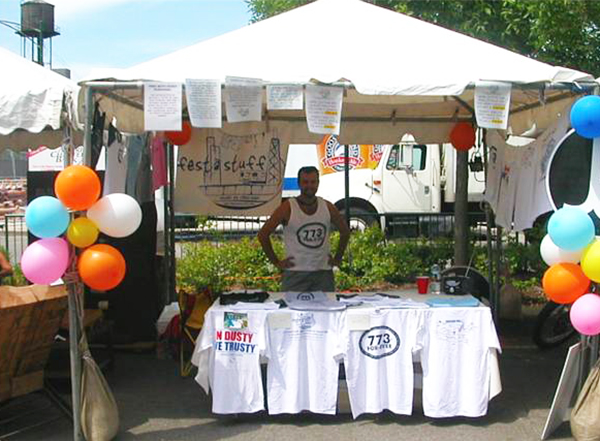 Great To Be Here® shirts have been featured in over 100 national magazines, newspapers, and TV stations, and sold in stores including Macy’s, Bloomingdales, Barnes & Noble College Bookstores, Mainstream Boutiques, Miami Airport Shops, Wrigley Field, the NBA Phoenix Suns, Anheuser-Busch/Bud Light Online Sales, the online shop of Teresa Guidice of Real Housewives of New Jersey, the Gatsby Salon from the Reality TV Show “Jerseylicious”, Boogie’s Diner, Chicago Sun-Times Gift Shop, and many more places! We’ve been on the Today Show, Chicago Tribune, New York Times, and countless other places. We were really on a roll! 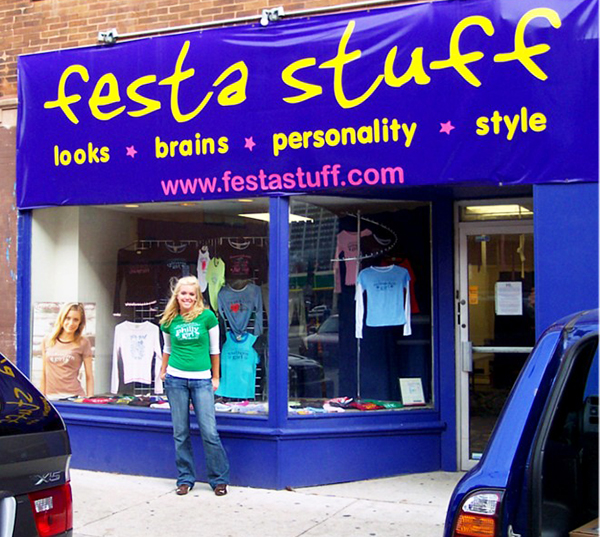 Our First Office Besides Chris's Apartment - Broadway in Chicago, 2004-2007

However, due to a number of factors, including Festa’s general inexperience in the fashion industry and inability to efficiently produce so many different t-shirt styles, we just couldn’t get over the hump to become a profitable and established brand. Starting in 2010, Festa began scaling down the t-shirt business and focusing on his other business, TBOX® Bar Crawls. By December,2010, Festa’s 15th Annual “Twelve Bars of Xmas” pub crawl in Wrigleyville, Chicago had topped over 10,000 participants, and he began an annual calendar of nightlife events that became his primary business. 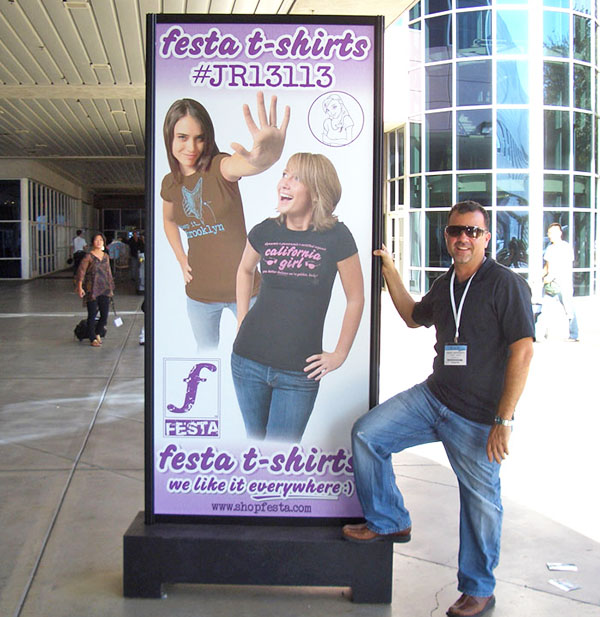 Ad We Placed at the MAGIC Trade Show in Las Vegas c. 2008

Great To Be Here® continued serving its loyal wholesale customers until just a handful remained by 2018. However, with the advent of Print-on-Demand t-shirt providers on the web, Festa began wanting to put his shirts out there to the world again. So starting in earnest in early 2021, we’ve been re-designing and re-issuing tons of our old designs, and brand-new ones, through Etsy. On Etsy, our shirts are sourced by the high-quality print service Printify, and we are using the same fashionable, stylish Next Level Apparel™ garments that we used for our wholesale fashion business. 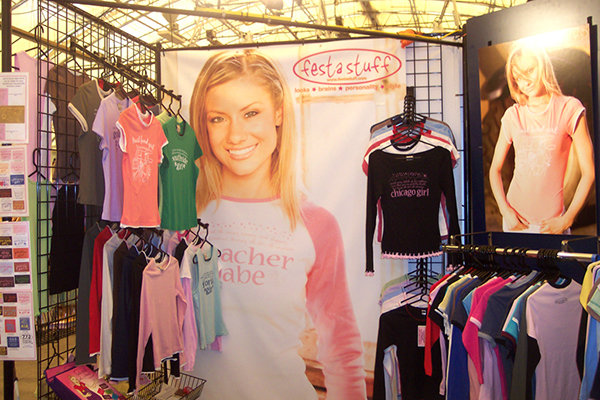 We feature t-shirts celebrating Cities, States, Regions, Neighborhoods, and Culture across the United States and the world. Also, we’re creating a series of general funny and clever “non-geographical” shirts as well. The goal with our shirts is to provide a clever, funny, original, unique and interesting take on where people are from and the places they love. Our brand “Great To Be Here®” is also our attitude on life and travel. Wherever you are, wherever you go, whatever room you walk into, just say, “It’s Great To Be Here!” – and that’s how we came up with our brand! 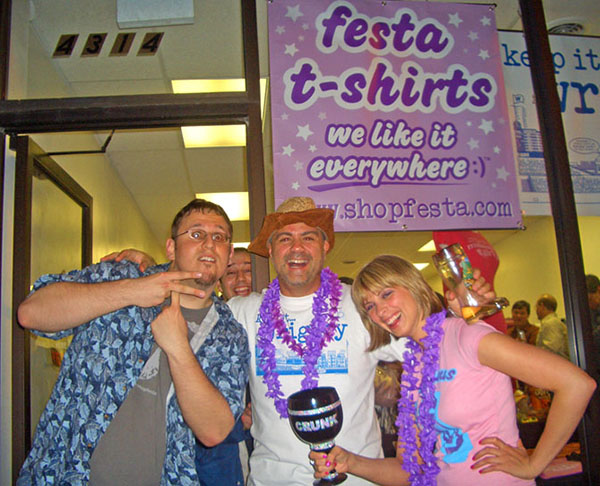 Our Great Festa T-Shirts team at Our Office on Lincoln Avenue, c. 2009

Our company has been based in Chicago, where Mr. Festa lived for over 25 years, thus, we have many, many Chicago t-shirts. Mr. Festa then moved to Florida, his childhood home, and so we have a lot of Florida shirts as well. Festa has traveled extensively to 49 states (sorry Alaska!), visited 35+ state capitols, road-tripped thousands of miles, and learned all he could about everywhere else he’s gone. We aim to have tee shirts from as many places as possible, so if you don’t see something you want, contact us and we’ll put it in the queue to make! 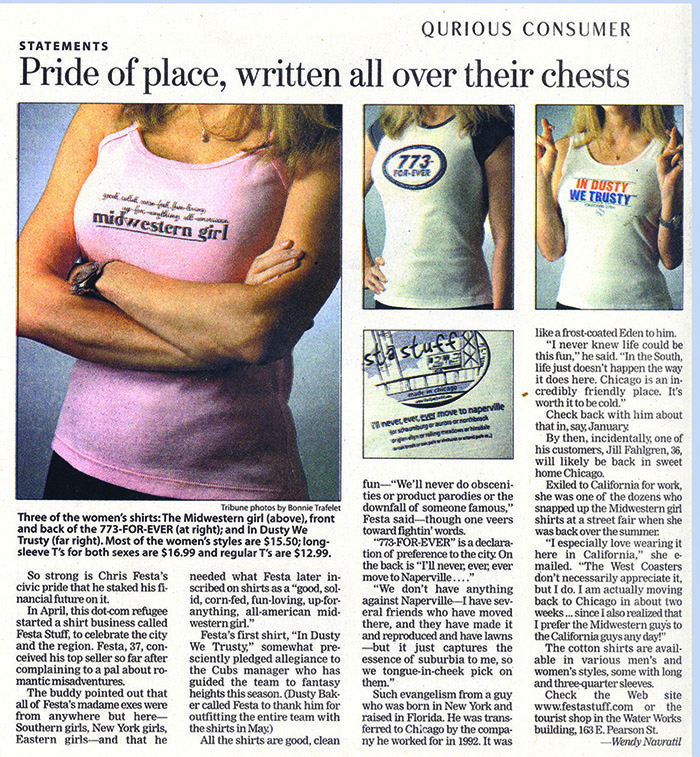 Chicago Tribune Article from 2003 that Led to Tons of Sales!

Also, if you are interested in bulk or wholesale sales (100+ of a particular design) – contact us and we will provide quotes and let you know how we can screen print and deliver our branded shirts to you.

All Great To Be Here® shirts have been submitted in USPTO Copyright Collections and are the exclusive property of Festa Parties Incorporated and Christopher Festa. We are also the Owners of the Federal Trademark for Great To Be Here®.

Thanks for checking out our shop, and hope you find some shirts you will love to wear!